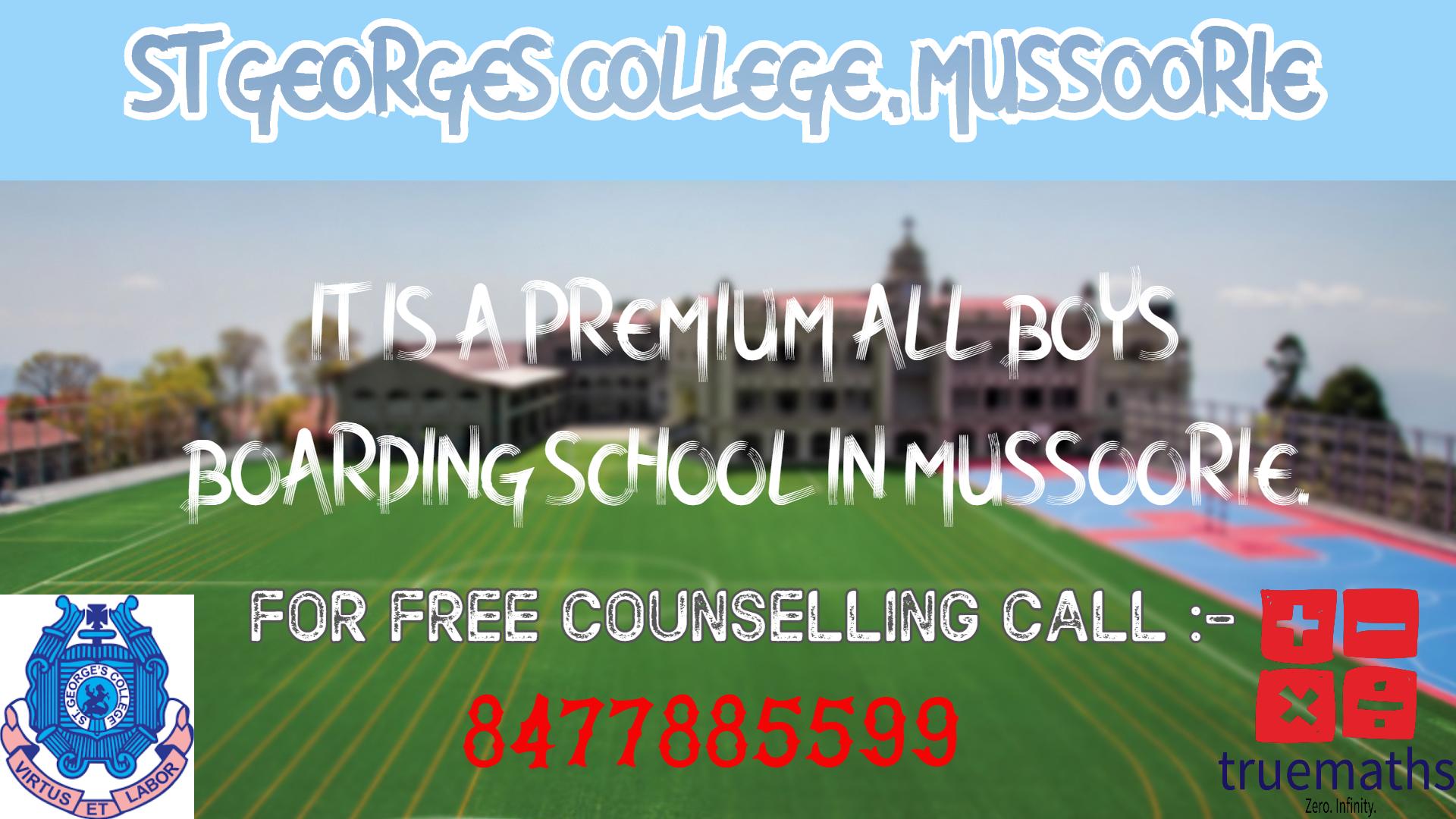 St. George’s College Mussoorie is a boarding school situated in the beautiful landscapes of the Mussoorie hills of Uttarakhand state in India. The school is affiliated to the Indian Certificate of Secondary Education (ICSE) council. The school is an all-boys residential and non-residential institution which is spread over 400 acres of land in Barlow Ganj, Mussoorie. The students from different parts of the world come to get quality education at St. George College Mussoorie. The school prepares the students to face the competitive world in any field of interest. The campus of the school has been ranked among the 20 best schools in our country.

Saint George’s School was founded in 1853 by the Capuchin Fathers and entrusted to the Society of the Brothers of St. Patricks (Ireland) in 1894. The school was started in a cottage known as Manor House. The campus is still known by this name and the students are known as Manorites. 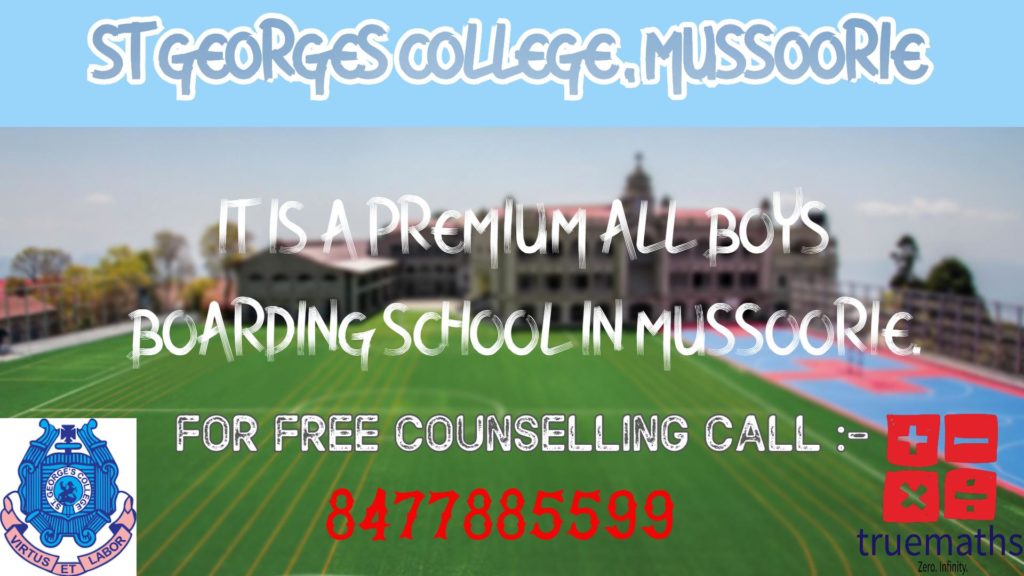 St. George School Mussoorie has a great background in shaping the career of many eligible students since its beginning. here are some of the most well-known alumni of the school includes,

What is St. George School Fee?

As the school is both boarding and day scholar, hence the St. George School fee differs in both the cases. An approximate overview of the fee structure of St. George School, Mussoorie is given here. 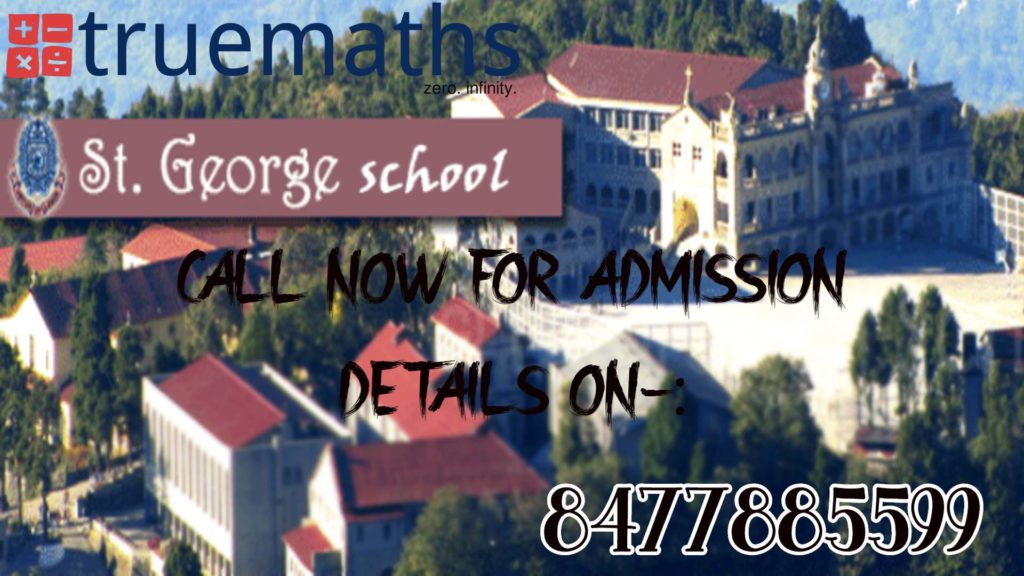 How do I get admission in St. George College Mussoorie?

There are certain documents that are required for the registration process at St. George’s College Mussoorie. These documents include a Demand Draft for Rs. 10000/- (non-refundable) in favour of St. George’s College, Mussoorie payable at Mussoorie. Along with this, three recent passport size photographs, birth certificate, the latest progress report, copy of Aadhar card of the students are also compulsory.

As far as the submission of fee is concerned, it is carried out from March to November and March to February respectively for Boarding & tuition fee.

The question paper of the entrance exam will be based on the topics studied in the previous class. The subjects for the entrance examination to get admission at Saint George’s School includes,

The students interested to be a part of St. George School Mussoorie should start the preparation for the entrance test. For preparation, you can join Truemaths Coaching Academy, Dehradun.

St. George School Mussoorie is one of the best schools in India located in the Mussoorie hills. This school attracts the students not only from India but from other parts of the world students come to get quality education at St. George School. The students who want to pursue their schooling from St. George College should start preparing for the entrance examination. As per the standard of the school, the entrance test is not going to be that easy. You have to put effort to qualify the entrance test. Truemaths will help you to prepare for the test.

We provide the best St. George’s School coaching. You can join the academy to improve your interpersonal skills along with preparation for the entrance test. It will help you to perform well in the selection procedure. To join Truemaths and to get more details you can call us @8477885599.

Call us Now for Free Counselling


Learning Mathematics has never been easier. As you all know, at TrueMaths we teach students from class 6 - 12 in the subject of Maths. Our mission is to strengthen the weak fundamentals of students in order to get them rid of the fear of Maths. TrueMaths is the best on-line maths learning medium for students on a regular basis. What makes TrueMaths better – we understand a student’s psychology as their Teachers/Mentors. We are professional, supportive and friendly. Our methodology is scientifically proved and focuses on understanding of concepts. We offer a 3-Tier On-line Assessments and Tests, Free Video Courses and Guaranteed Improvement.
Every child has vivid approach to solve a certain query and as a teacher it is best to evaluate to their approach of dealing with the problem instead of dominating them to solve their query in their style. It is always quite easy to learn through games and activities. We try to engage students in such activities and fabricate the school maths and english curriculum in an easy to understand and more interesting way. This would also help them have a better visualisation and grasp of verbal and non-verbal reasoning.
Our aim is to help students have a distinct and well-defined character. This is done to help them crack admission in various International Boarding Schools such as The Doon School, Dehradun and Woodstock School, Mussoorie. We also aim to help students have a definitive persona and make them commendable young men and woman of aura.